Happy New Year
We hope everyone is having a great start to 2019. Callisto and crew spent Christmas on St. Lucia.  We were able to meet up with Marsha and Bob Perry on Crusader.  Marsha and Bob are people we met in St.Lucia and now that we have moved to Maryland, we also see them in the summer.  We were invited for Christmas Eve dinner aboard Sequoia, Outbound hull number 5 in Rodney Bay Marina.  Sequoia and crew are reputed to have the most sea miles under their keel of the Outbound fleet...40,000? plus?  who’s counting..it’s a lot and the boat is in beautiful condition.
Our next stop was the Anse d’Arlets on Martinique for New Year’s Eve...chosen for a quiet and calm night.  Which we did indeed enjoy. 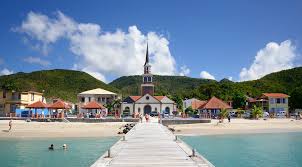 The last harbor on Martinique before continuing northward is St. Pierre.  We have always wanted to attempt to climb up Mt. Pelee,the infamous volcano, and this trip we finally decided to give it a go.  The cab driver we hired to take us to the start of the trail could speak some English and between my understanding of French,we were able learn a bit about each other.  Emmanuel went to Paris to study aeronautics in the late 70’s, with the dream of becoming a helicopter pilot.  Unfortunately, his father became very ill and he had to leave school to take care of family.  He made the rueful comment that at least he has command of his taxi.  He and his wife travel quite a bit, most recently to Montreal.  They have two grown sons and one grandson.
We did not make it to the top of the mountain, as you can see from the photos the fog rolled in from the Atlantic, making the path quite slippery and the view completely obscured by mist. 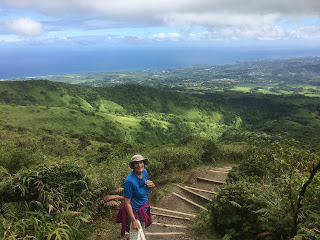 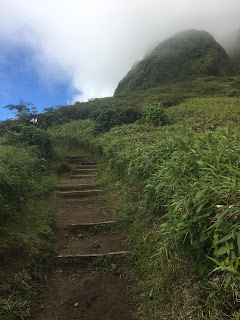 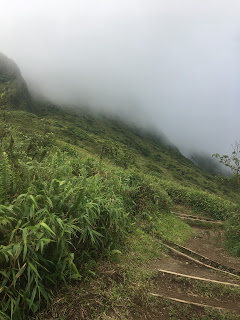 Now we are in Prince Rupert Bay in Dominica.  Our sail from St. Pierre to here was one of the more boisterous passages we have had in awhile.  When we arrived in the harbor, Sequioa was moored just in front of us, heading north the next morning, and later that afternoon, another Outbound named Estelle came in. She is hull 63, very new.  We think the latest hull to launch was 65..  time was we did not see any sister  Outbounds, it’s fun to find each other serendipitously.