Nevis and an Overnight Passage 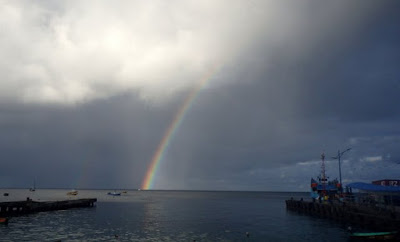 We simply love the island of Nevis.  It is one of two islands that together make up the Nation of St. Kitts and Nevis.  They couldn’t be more different.  St. Kitts is populated and the main town is bustling.  They have invested in the infrastructure to accommodate cruise ships, and the get a lot of big ones.  Our experience is that the islands that are infested with cruise ships just aren’t very pleasant for cruisers.  The interactions between visitors and local people become strictly a matter of moving money from one person’s pocket into another’s.

Nevis, on the other hand, is small, rural and peaceful.  They get a few very small cruise ships, but they haven’t affected the atmosphere much (except for raising taxi prices).  There is a big Four Seasons resort with a big and expensive golf course (we’ve never played it).  In addition, several old plantation houses have been turned into high-end hotels.  These are just lovely—we make a point of visiting a different one for lunch each visit.

The beaches on Nevis are outstanding.  We often take advantage.

The only downside to Nevis is the infrastructure for landing your dinghy.  They have a large and very busy ferry dock, since the main way to get to Nevis is a ferry from St. Kitts.  Next to this is another dock mainly dedicated to fishermen.  In between these is the space for dinghies.

There are two big problems with this arrangement.  First, the space for dinghies is sometimes usurped altogether by boats landing passengers from the occasional cruise ship, or by fishermen landing their catch.  Second, and even a bigger deal, is the surge.  This space is situated so that large waves come crashing inside, and ricochet back after hitting the shore.  It could be swell from the far ocean, or it could be wake from a ferry or other boat.  In either case, it sends your dinghy smashing and bashing into the dock, into other dinghies, into other boats.  We have seen a person’s dinghy completely destroyed as it was forced under the dock by the surge and then caught on a rising tide.

We cope by using a stern anchor with a long rode, and by simply avoiding the dock when things are particularly bad.  We have sometimes had to land on the beach and take a long walk to town, though this year that wasn’t necessary.

A friend we met on Bonaire, Margie Benziger, found out we were on Nevis and got very excited.  She had spent time there, and worked on public relations for the island.  A good friend of hers is still on Nevis (most of the year), working for The Hermitage, one of the plantation hotels.  Helen Kidd is a Scot, extremely friendly, and also excited that we had come and introduced ourselves. 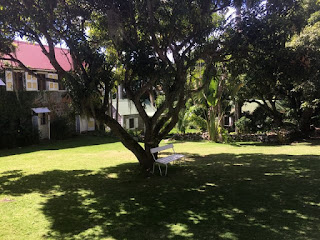 The Hermitage is a lovely place.  It still has the original plantation house, built in 1670.  This is constructed of wood and is one of the oldest wooden structures in the Caribbean.  The grounds are beautifully landscaped and all of the buildings are in the traditional Caribbean style.  We had a very pleasant lunch there, and spent some time exploring the grounds.

One of our favorite activities on Nevis is hiking.  In the past we have taken a couple of hikes with a guide.  Nevis is shaped more or less like a sombrero – A tall peak in the center surrounded by a large flat area around it.  This time we decided we would try hiking to the top of Mt. Nevis.  That’s 3200 feet above sea level.

We inquired at the tourist office and they hooked us up with a guide.  We didn’t realize it at first, but they had called Reggie Douglas, who took us for a mountain bike expedition a couple of years ago.  It was great to see him again.  He runs Nevis Adventure Tours and Green Edge Bike Shop (greenedge2011@hotmailcom)

The “hike” to the summit is better described as a “climb.”  It is entirely natural, no steps or guard rails.  It is steep, it is muddy, and it is slippery!  The only aids to climbing, besides lots of roots and branches, are many ropes that have been installed by the handful of guides who lead people up.  Think steep like climbing a ladder.  A muddy, slippery ladder.

Reggie was great.  He has gotten many, many people (even beginners) up to the top and back down again.  It seemed he had a pre-thought-out plan for nearly every step of the way, and he was with us and coaching us all the way up and all the way down.  The round trip took about four and a half hours.  We were tired when we reached the bottom, but it was a fantastic experience.  The scenery is breathtaking, even though our view at the summit was blocked by a dense cloud. 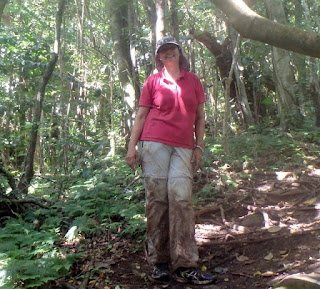 A final cool thing about our visit is that we saw the Green Flash three times!

After several excellent days on Nevis, it was time to continue our journey down the Caribbean chain.  Our next stop was to be Guadeloupe.

This is a passage of more than 70 nautical miles.  At 6 knots, that’s a long day.  In the past, we have tackled this by leaving well before dawn, sailing hard on a single tack, and arriving just before dark.  That left us competing with other boats for the limited anchorage space.

We didn’t like leaving in the dead-dark morning hours.  There are fish trap buoys everywhere and even some fishing boats anchored without lights.  Its nerve wracking until you get several miles from Nevis.
This year, we had another problem.  The weather forecast was for light winds from an unfavorable direction, which means tacking.  I guessed we might sail as far as 100 miles to reach Guadeloupe.

So we decided to do another overnight passage.  Funny how something that seemed so scary a couple of years ago now seems pretty normal.  We left just before 4 pm, figuring on a 15-16 hour passage given the forecast.  As it so often happens, the forecast was wrong.  We had quite strong winds, and from a relatively favorable direction.  Oh no!  What would we do if we arrived at 3 in the morning?

Well, not to worry.  As we passed the island of Montserrat (with its active volcano and intense sulfur smells), the weather returned to the forecast.  We had light winds, ended up having to tack, and arrived just at sunup.  A passage of 85 miles in 15 hours.  We finished a second time very tired, but happy to have made the journey.

Moving on and close calls

Just 30 minutes from Marigot Bay, we arrived on the afternoon of Jan 2nd.  Lots of boats were finishing their holidays, so the harbour was fairly full.  It's a great town, full of excellent restaurants, beach bars, rib joints, all the way to gourmet.

When we anchor or pick up a mooring, we (meaning David) puts on his goggles, and snorkels to inspect how we are attached to the bottom.  A critical factor is called "scope", or how much anchor chain or mooring line there is from the the boat to the bottom.  The factor we use is usually 5 x the depth.  Not everyone does, this, and for many the amount of chain or line they let out to anchor is not sufficient, especially if there is a lot of wind or wave action.  Hence, the close call...

We were eating lunch in the cockpit (at the rear or stern end).  The boat points forward into the wind.  I heard someone playing music, and it kept getting louder.  I looked towards the front of the boat and saw a large catamaran not 10 feet away.  Since there was music playing, we assumed there was someone on board and they were manouevering (badly)--NOT!  Within moments, the boat was slipping sideways along our side.  David rushed for our dinghy and I went forward to try and push them away.  The solar panels from their boat started overlapping our side lines.  I quickly changed my position, getting between two several on boats grinding together is not a good idea.  At that moment one of our neighbors arrived on his dinghy, and with a fortunately swing in the wind and a push from his dinghy, we were free.

The catamaran continued to be blown out to sea.  The rescuer attached his dinghy to the catamaran, started the engine and found the controls for the anchor.  One thing the "sailors" had done correctly is leave the keys in the engine, an important safety precaution for just this kind of occasion.

David radioed a "Security" call about the boat adrift and then went ashore from bar to bar asking (unsuccessfully) for anyone on the boat "Blue Cat".   About half an hour later, the crew returned to the boat.  We assume that the charter company heard the radio alert and phoned the charterers.  We expected a visit from them to inquire about our well-being or for them to visit the rescuer on his boat, but no such thing.  Oh well...

A little adrenalin at lunchtime goes a long way.  We ended the day in Il Nettuno, with a nice bottle of Bordeaux and an excellently prepared seafood dinner.

Wednesday we leave for St. Barth's, we may be there for a few days, the wind is going to be very light (either too much or too Little!) and from the southeast, not the best for moving on to St. Kitts-Nevis.   We should be able to be online in St. Barth's, so until then!

Posted by Gretchen at 2:00 PM No comments: