We have had very limited internet access the past couple of weeks, so no chance to post.  We are currently moored near a restaurant on Nevis that spills wifi into the harbor, so we're back online again.  Lots of news to catch up on.

Saba was a very interesting island.  There isn't any real harbor or place to anchor, but they have put in place several moorings for visiting boats.  We had read, and heard, that there were significant waves affecting the mooring field, which would cause the boat to rock back and forth.  In fact, we were lucky and had very little rocking and rolling.  The winds were very strong, though, whistling around the little island and making a racket all night.  The worst part of the experience was a very long dinghy ride from Callisto to the dock, with enough wind and waves to ensure we were very wet when we arrived.

The island of Saba is more than 3000 feet high (nearly 1000 meters), and only a couple of miles across.  The sides are steep cliffs, and there are only a couple of places where you can land a tender and get onto the island.  This island was settled by the Dutch around 1600, and is extremely picturesque.  There are about 1400 residents, not counting 400 medical students.  All of the homes were very well kept, with nice gardens and landscaping.  We visited on a Wednesday, which happened to be the day that a ship came to deliver supplies to the various grocery stores.  There was a steady stream of customers in the stores, trying to shop while the selection was good.

From Saba we went to Statia, which is bigger but quite similar in topography.  This anchorage was very rolly, but we got more or less used to it.  We had lunch in a restaurant near the harbor, and struck up a conversation with a man named Tom.  He is an American who has moved to the island, semi-retired but still working from there.  Tom invited us to dinner, which we readily accepted.  We had a great conversation with him, and a Dutchman named Kaes, about life on the island and the challenges there.  His house was absolutley spectacular, with a million-dollar view.

After a couple of days on Statia, the rolling was getting old, so we were glad it was time to move to St. Kitts.  We had arranged to meet our friends Don and Pat from Williamston, Michigan there for week.  They were happy to escape the Michigan winter for a bit.

Basseterre, the main town of St. Kitts, is even more rolly than Statia, but we had arranged to stay in a marina there.  This was a close call, since the original price quote we received was a ridiculous $465 per night.  It turned out the correct price was $35 per night, much more reasonable!  The marina is not very fancy -- basically a concrete bowl with some wooden finger piers.  No amenities.  Even the restrooms were an extra $4 per day, and they had no hot water.  However, the water was calm, and the location is terrific.

St. Kitts lives and dies with Cruise Ship traffic.  There is a big dock, and immediately adjacent is a large area of shops and restaurants.  When a ship is in, the town is chock full of passengers (mostly bored, I think), and all the shops are open.  On a day with no cruise ship visiting, it is basically a ghost town.

The main part of town is a bit better, but still very dependent traffic from the ships.

We took a long taxi tour of the island, and saw a few sites.  The highlight was the fort on Brimstone Hill.  This was built by the British as their main fortification in the Caribbean.  A restoration has been completed to a very high standard, and this is a wonderful piece of history available for viewing.  This is a very large place -  more than 1000 people lived there in its heyday. 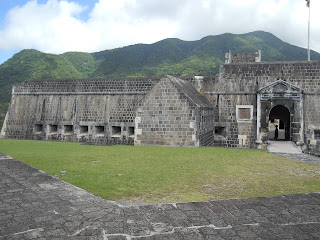 One day, we had the taxi take us to a beach and we spent the day swimming and hanging out at the beach bar.  Very relaxing.

By Thursday, we had had more than enough of Basseterre.  We left the marina and sailed to Ballast Bay.  What a contrast!  Quiet, rural, and peaceful.  On Friday we dinghied over to the shore to look around.  It was very rocky, with quite a few interesting shells mixed in.  We walked along the shore, and saw the remains of a road heading over the hills.  In order to get to the road, we had to cross a low area.  Big mistake.  It was soft, black, sticky mud.  David had managed to get lucky and cross without sinking into the mud.  Don and Gretchen had more problems, but poor Pat sunk in up to her knees and almost lost a shoe.  Then we had to go back!  We found some rocks to make a stepping stone path.  Luckily the washing machine on board Callisto was able to get the black mud out of Pat's clothes.

On Saturday it was time for Don and Pat to return to the states.  We had arranged for a taxi to meet us in White House Bay and take them to the airport.  It was great fun having old friends to share our cruising experience with (and the nightly bridge tournament was a bonus). 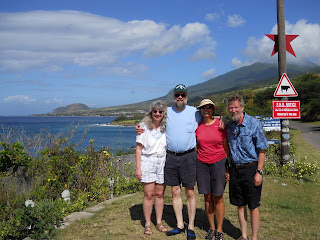 What a wonderful part of the world

We spent longer than we had planned on Anguilla, it was a very nice and comfortable place to be.  We moved along to St. Barthelemy, known everywhere as St. Bart's, and have been here for 10 days.  This is also a very cool place to be, a French island with a lot of visiting superyachts, but still quite laid back and friendly to cruisers.  We spent several days in the harbor outside Gustavia, then moved to the St. Bart's Marine Park, first in Anse de Columbie, and then to Ile Fourchue.  These are small bays that have only a few mooring balls installed, and usually not all were even in use at night.  Great snorkeling and excellent hiking on shore.  Ile Fourchue is a prototypical desert island.  There used to be goats there, but they ate every bit of vegetation, including the cactus.  The goat population crashed, and the last few were removed a few years ago.  Vegetation on the island is clearly making a comeback, but it is still an eerie and moon-like scene.

After the Marine Park, we returned to Gustavia to get a weather report and to plan our next passage.  We want to visit Saba, but this can only be done when the weather conditions are favorable.  We ended up staying a couple of extra days in St. Bart's (no hardship!), and are planning to make the 30-mile passage early tomorrow.

We will spend only a couple of nights on Saba (weather permitting).  We have to be in St. Christopher's (St. Kitts) by Saturday to meet our friends Don & Pat.  Not sure yet if we will stop on the island of St. Eustatia first, or go directly to St. Kitts.
Posted by David at 10:19 AM No comments: