In the tropics, and in the winter, the rain storms tend to be frequent but short-lived.  One of the consequences is that we see a lot of rainbows.

Today we made a passage from Martinique to Dominica, about 35 miles.  The weather was pretty wild -- 25 knots of wind, 10 foot waves.  We sailed on a beam reach, making 9 and even 10 knots through the water (a knot less over the ground due to adverse current).  The only downside was the intense rain showers that we sailed through.  The waves were on our beam, so we had a few memorable rolls.

We saw at least 3 rainbows, all of them at least partial double-rainbows.  Very beautiful.

Here is a short video that gives a bit of the feeling of the day.


We returned to Bequia for Christmas, anchored out along Princess Margaret Beach.  The anchorage was “rockin’ and rollin’, so much so that Gretchen had to move to another berth to avoid landing on the floor in the night.

We had problems (again!) with the outboard motor for our dinghy and called upon Kerry, the best mechanic we have found in the Windward Islands.  He quickly diagnosed our problem, fixed it and then provided a spare part from his “stores” in case the problem recurs beyond repair.   He noticed how much we were rolling and recommended a reputable mooring close into town managed by “Phat Shag”.  The Dive Bequia staff also gave a good review, saying that he regularly dives on his moorings and does appropriate maintenance.

We were very happy to be close in—although the music on the beach was LOUD, we were flat on the water and much more comfortable in the night.  Christmas Eve brought on a big surprise—major thunderstorm activity.  We have never experienced electrical storms this time of year in the Caribbean.  It rained all night and most of the morning, with lots of wind and lightning.  We were able to take a hike to Fort Hamilton and see the cannons aimed at the entrance to Admiralty Bay.  It was interesting to note that the fort was named after an American, Alexander Hamilton, although the purpose of the fort was to defend the island against American privateers and the French.

Our next stop was Soufrière on St. Lucia, and there we found out how lucky Bequia had been during the storm.  There were nearly 20 people who died in St. Vincent and St. Lucia due to landslides and bridges collapsing.  Several towns in St. Lucia were cut off for a few days due to bridge outages and roads blocked by mud.  I am sure that St. Vincent suffered similar problems.  The unstable ground and steep terrain will make repairs very difficult, and in Soufriére, new restrictions on where construction can occur have already been put in place.   We saw at least five homes that were totally destroyed, and several more that were damaged by mudslides.   Much of the same area was severely damaged during Hurricane Tomas four years ago, and there just isn’t very good holding for soil on such steep terrain.

But the Soufriére anchorage was lovely: 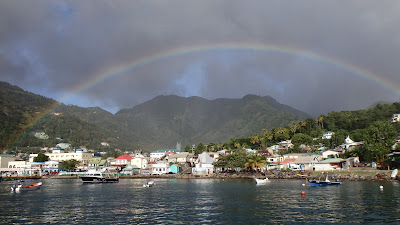