Nevis, part of St. Kitts and Nevis, is a wonderful island, laid back and with very interesting terrain.  It has one of the taller mountains in the area, but also more flat areas than many islands.  St. Kitts is a cruise ship center, and we noticed that there has been an effort to get more cruise ship tourists to visit Nevis by ferry.  Good for the local economy, not so much for cruisers like us.

We took an interesting hike, and visited some ruins of an old estate.  On the way, we were directed by a trail-side sign to this very interesting tree: 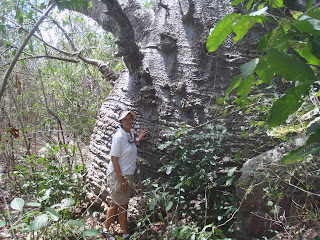 The estate ruins were also very interesting, though completely overgrown  with vegetation and unrestored.  Here are a few shots: 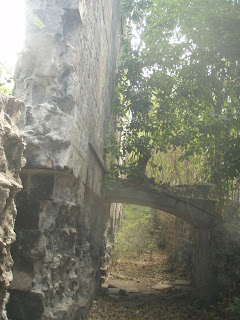 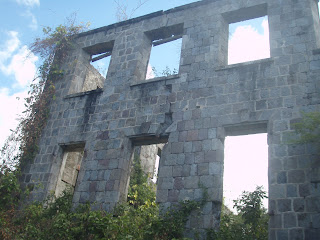 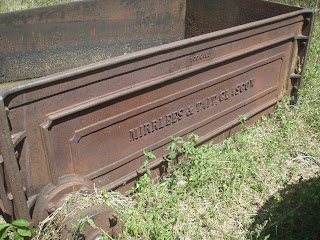 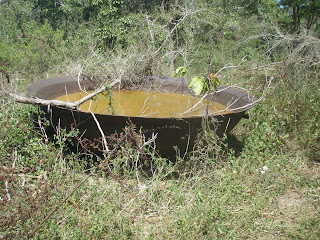 This is a kettle used to boil down sugar cane juice into sugar.  It is about 8 feet in diameter. 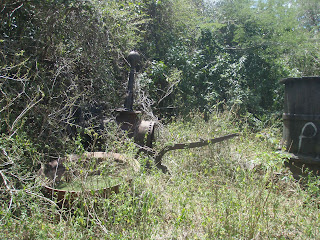 Remains of an old steam engine, and a smaller sugar kettle. 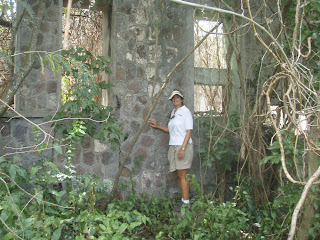 In the 1600's, about a quarter of the non-slave population was Jewish.  Ruins of the synagogue still can be seen in the main town, and there is a Jewish cemetery, still very well-kept, near by.  We took a few photos of some of the gravestones there: 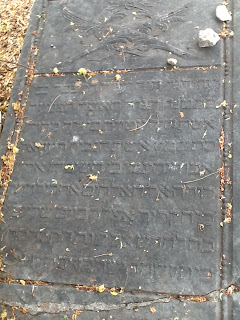 The stones are placed by visitors to acknowledge the person buried there. 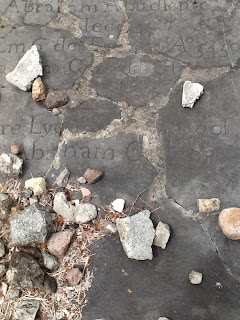 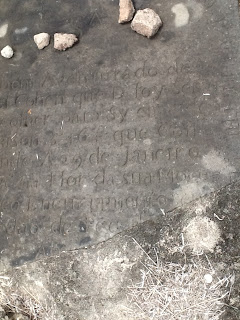 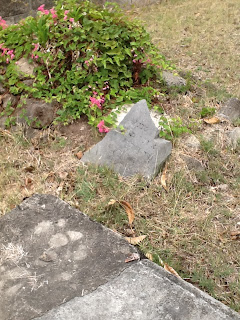 Our experience in the tropics has been very different.  Basically, every day is a good day for sailing.  We don't like sailing in rain squalls, but the weather forecasts that are accessible to us do a terrible job of predicting squalls.  And they are so frequent, especially early in the winter, that you just can't expect to avoid them.  There are some variations in wind direction that occasionally influence our routing decisions, but this hasn't been the norm.

This season, however, has been very different.  We have been stuck for days because the wind was from an unfavorable direction.  The Caribbean has been experiencing severe northerly swells the past few days, and that has influenced our choice of harbors.  We have had to postpone sailing because the forecast winds were too light.

Well, its the luck of the draw.  We tend to sail whenever we feel it is safe -- and that includes being confidant we will be set the anchor during daylight.  Safe for us includes a pretty wide range of conditions.  Sustained winds of 30 or even 35 knots are really no problem for Callisto, with the proper sails set.  And waves of 10 or 12 feet aren't usually unsafe, though they can be very uncomfortable.  Fortunately, we have rarely seen waves that big.  Our biggest concern is encountering a squall just as we are entering a harbor.  Strong winds and poor visibility can be a real problem when you are trying to maneuver in tight quarters.  We sometimes will turn back out to sea, waiting for a squall to pass.

Regarding forecasts, when we have internet we tend to look at a few different websites.  Some of our favorites include:

It is very helpful to compare multiple forecasts, since the more they agree, the more reliable the forecast tends to be.

When we do not have internet, we can access weather forecasts through our SSB radio.  This is less convenient and the information is more limited, but it is still important to keep up to date with the weather!
Posted by David at 8:40 AM No comments:

The town of Deshaies, on northern Guadeloupe, is a sleepy little fishing village.  It gets a lot of cruising boat traffic because it is a very convenient place to clear customs on the was into (southbound) or out of (northbound) Guadeloupe.  The town does its best to extract Euros from the cruisers with a raft of interesting restaurants and a few boutiques.

The harbor is quite good, but fairly small and can get crowded.  We always try to arrive by mid-afternoon to make sure we can get a good spot.

If the wind is strong from the east, it gets doubled by the mountain peaks and can really howl.  If it is light, you often get a sea breeze at midday, and a westerly wind (very unusual in the tradewind zone).   For the first time in the Caribbean, we have been stuck here by weather for a few days.  We want to go next to Antigua, which is about 45 miles north of Deshaies.  For the last couple of days, the wind has been very light, so we couldn't go anywhere.  The forecast for the next few days is for stronger winds, but out of the north -- also not convenient.  So we have had a bit more time to explore the area than we planned.

Our trusty "Cruising Guide to the Leeward Islands" recommended a hike up the Riviere Deshaies.  It was promised to be a couple of hours.  There is no path -- you hop from boulder to boulder, sometimes on the left bank, sometimes on the right bank, sometimes up the middle of the river.  It takes some planning and some occasional backtracking.  Some of the boulders are as big as Renaults.  It is amazing to think about how they got there.

There were numerous pools, and Gretchen had a good time looking for (and finding) fish in them.   Many little waterfalls made for a very pleasant sound.  It is always a puzzle to us that we so rarely encounter mosquitoes on these Caribbean islands.  It sure makes hiking in the forest more pleasant.

After the promised two hours, we came to a road that led past a Catholic religious retreat back into the village.  A bit weary, but very glad we made the trip.

We are anchored off the island of Terre-de-Haut, part of the group of islands known as Isles des Saintes or simply Les Saintes.  These islands are part of Guadeloupe, which is in turn a department of France.

We love the French islands.  The atmosphere is a fun mix of laid-back Caribbean and Continental flair.  The Saints depend almost exclusively on tourism, but the competition for tourists' business doesn't ever seem pushy or obtrusive.  The one downside is that the restaurants are uniformly excellent, so we spend a lot of money eating out.  Neither of us knows very much French (Gretchen knows way more than David), but we get along with little difficulty.

With our new Scuba certifications, we arranged a dive with a local dive shop, Pisquettes.  It was fantastic!  The fish were incredible, both in number and variety.  We are a bit blasé about seeing Sergeant Majors, but we have never seen schools as large as the ones here.  We saw trunkfish, triggerfish, angelfish, and some very large Atlantic spadefish.  Other treats included some good-sized barracuda, a spotted Moray and a huge lobster.  The array of corals and sponges was better than we have ever seen before.  A couple of the participants (including David) started the dive with slightly less than full tanks, so unfortunately the dive was a bit shorter than planned.

After the dive, as we were raving about the dive, the dive master asked if we would like to go swim with some dolphins?  Well, yes!

There are a couple of dolphins, a mother and a nearly grown calf, who swim most every day in the harbor.  The dive boat went in search of them, and we found them with little difficulty.  Everyone piled off the boat with snorkels and fins, but the dolphins disappeared.  We all got back on the boat, and sure enough they appeared again.  This time we cruised around slowly, waiting to see if they would stick around.  Eventually most of the divers (David but not Gretchen) got back in the water.

There were quite a few swimmers, some from boats moored nearby, some from the dive boat, some who had come over in dinghy's.  The dolphins seemed to enjoy the company.  They would slow down so that the swimmers could catch up, and then speed ahead or turn around and dive under us.  The pair swam straight toward David at one point, and turned aside when they were within arm's length.  Extremely beautiful, and a rare privilege.
Posted by David at 12:10 PM No comments: