Since we are spending so much time in one spot, we thought we would run an experiment, and rent mountain bikes for a whole month.  The bike shop is near by, and they agreed to store the bikes for us when we aren't using them.  This avoids having to transport the bikes back and forth to the boat, or risking theft or damage if we left them locked up on the street.

So far, I'd say the experiment is tending positive.  Economically, we are probably paying a bit more than we would have if we'd just done daily rentals when we wanted a bike.  Offsetting this is the fact that we are certainly using the bikes more than we would with daily rentals, for example for relatively short trips into Kralendijk.  Plus, we don't have to deal with rental paperwork for each ride.

Yesterday, we took our longest bike ride ever.  We rode to the village of Rincon.  This is the oldest community on Bonaire.  It was established relatively far from the seashore, as a means to reduce attacks from pirates.  Rincon was the home for most of the slaves who were brought to the island, even those who worked in the salt flats an 8-hour walk away.

We visited Rincon to attend the monthly Cultural Market at the Mangazina di Rei (warehouse of the King) culture park.  This is a park built around the second oldest stone building on the island, where provisions for the slaves were kept by the Dutch government.  The park is a work in progress, with only a small fraction of the land area developed to date.  The Cultural Market was mostly a chance to eat local foods, with some fairly corny live music.  There is a small museum that documents some of the artifacts used in daily life on the island, and a terrific playground with lots of things to climb on.

Our route on bike to Rincon was a bit of an adventure.  We had found a designated bicycle route on the island map, and thought we'd give it a try.  It was an unpaved road, and it must have been a long time since it saw a road grader.  Very bumpy, with a rough washboard surface.  The first kilometer or so was nicely marked with blue-painted stones, but then we were on our own to find our way.  As we got nearer to Rincon, we had to ask for directions.  There were lots of steep up and downs to challenge our fitness, and the hot temperatures didn't help any.  But we made it the 14 km to the market.

On the way home, we decided to use the main road.  The first half was mostly uphill, across the backbone of the island.  Traffic was speeding by us very fast, but the drivers were quite polite and gave us plenty of room.  By the time we reached the boat, we were certainly tired, and very much aware of the small bicycle seats.
Posted by David at 8:01 AM No comments:

Iguanas and Lizards, Oh My!

Gretchen's niece, Maggie, and Maggie's friend, Scott, have been visiting us on Bonaire this week.  It is Maggie's first experience of a tropical island, and we think it has been a pleasant one -- for the most part.

We rented a truck, took the pair on a tour of the Bonaire National Park.  This is a very rugged natural area on the north of the island.  The roads are all unpaved, and in very bad shape in some places.  There are a variety of places to stop along the way.  For example, there are several blowholes on the eastern coast, places where waves crash into small inlets sending spray high in the air.

A favorite sight in the park is the ever-present flock of flamingos. 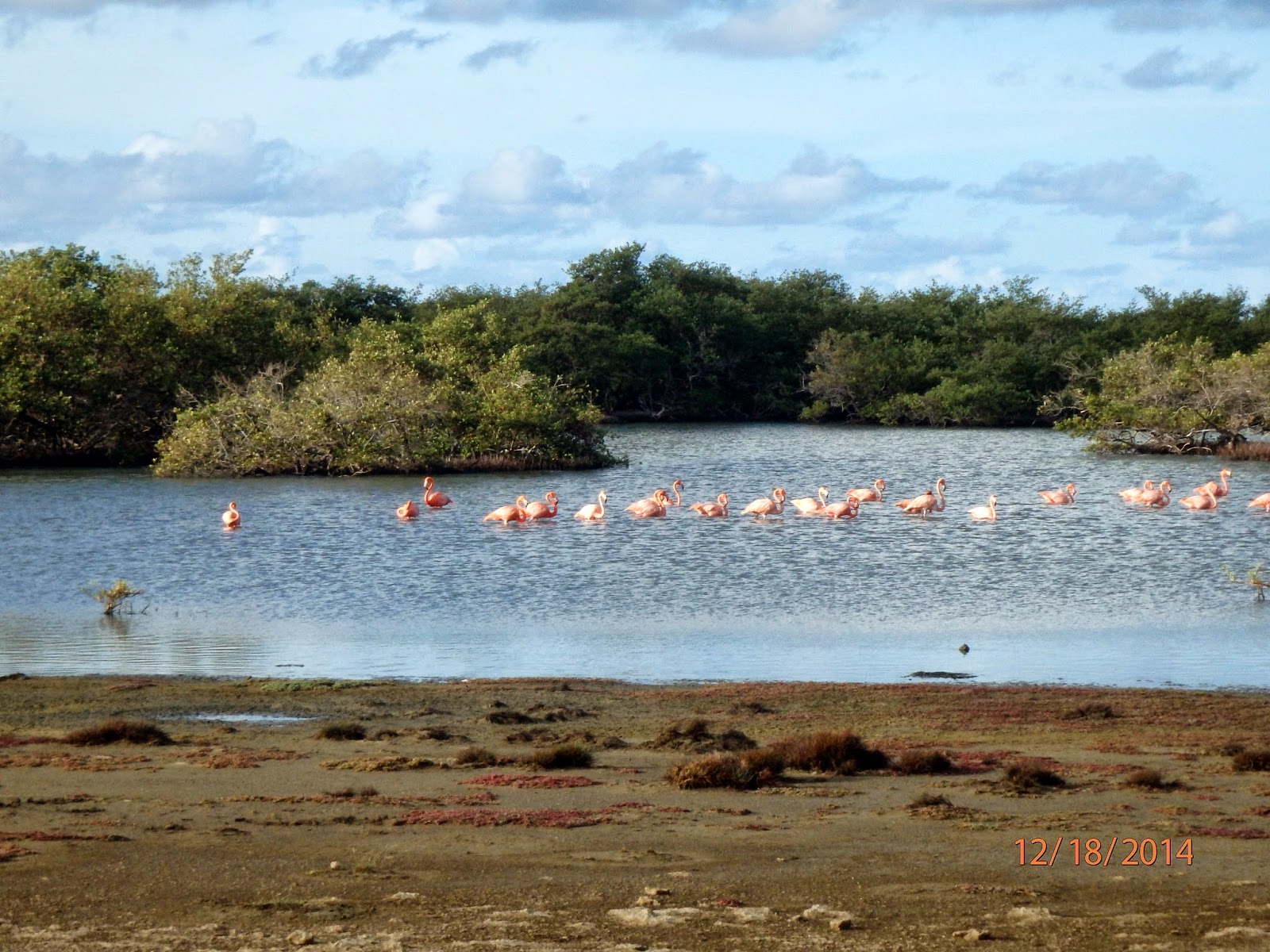 But the "highlight" of the tour was during our lunch stop.  We parked near a little beach named Playa Funchi, which has a couple of simple benches to sit on in the shade. As we got out of the truck we saw a couple of quite big iguanas lurking in the bushes near by.  Maggie had never seen an igauna this close up, and was very interested to see them.

We sat on a bench, and started eating the sandwiches we had brought along.  Suddenly, we were surrounded by lizards (maybe 20) ranging in size from 4-12 inches, plus a big iguana, all of whom wanted our lunch.  They were quite aggressive, running towards us and trying to startle us into dropping food.  This was too close for Maggie, and she walked onto the beach to finish her meal.  An iguana immediately hopped onto the bench where she had been sitting, only a few inches from Scott.  Well, the iguana got his wish:  Scott leaped from the bench and dropped some of his sandwich innards onto the ground.

The iguana didn't benefit in the end, though, because several of the smaller lizards scarfed up the scraps before he could get to them.

For the rest of the meal, it was a war.  Lizards jumping onto our shoes, trying to crawl up our legs.  I had to kick the iguana a couple of times (gently) to get him to back off.  He would move (very quickly) about a foot, and then edge his way back.  Staring intently at me the whole time.  A second, even larger, iguana soon showed up to join in the fun.

It was a very quick meal!  As soon as we could, we jumped back in the truck to continue on our way.

Sorry, no iguana pictures, too busy to take any.

The trip from Curaçao to Bonaire is dead upwind, and into the teeth of the waves.  Its also a long enough journey that you can't afford to dawdle.  So its always a long day.  Especially when its your first sail of the season.

We left as soon as it was light enough, before 06:30.  The channel that divides Willemstad is a famous relic, a pedestrian bridge that rides on pontoons.  It uses two electric motors, like outboards, to swing out of the way.  You call the harbor master to arrange for the bridge to open.

We dutifully called, and were told to proceed to the bridge and it would open when we arrived.  Well, we arrived, but the bridge didn't open.  Calls to the harbor master went unanswered.  We circled slowly in front of the Willemstad frontage for 30 minutes, until two pilot boats approached --  then the bridge finally opened and we were free.  So much for an early start.

The conditions were exactly as predicted, wind and sea on the nose.  The waves weren't too bad, maybe 4-5 feet, but they still slowed us down a lot.

We had intended to put two reefs into the mainsail for our motorsail to Bonaire, but discovered that David had rigged the reefing lines drastically incorrectly.  The sea was really too rough to sort it out on the way, so we raised the full main and charged ahead.  Fortunately, the winds weren't too strong and it worked out fine.

About half-way across, a wave over the bow knocked loose one of the straps tying our dinghy to the foredeck.  David went forward and reset it without much problem, but came back more than a little green at the gills (seasick).

Luckily, with the full main and a slight southerly windshift, we started getting some push from the sail as well as the engine.  That sped us up to 7+ knots, so we arrived in good time, about 14:30.  We had heard rumors that the mooring field at Bonaire was very full.  It was, but there were 4 or so still available to choose from.  We had one of our best, least dramatic, pick-up of the mooring ball.

Happy to be here, and looking forward to some relaxing snorkeling, hiking, and soon some diving.
Posted by David at 1:26 PM No comments:

Ready to Head Out

We've been diligently working down our to-do list, and have completed as much as one ever can complete of such lists on a boat.  We've visited customs and immigration, and tomorrow at dawn we will head for Bonaire.

Counting the time in the harbor at Willemstad, we will have to travel about 45 nautical miles to reach  Bonaire.  This is the tradewind zone, which means that the winds are always out of the east +/-.  In other words, we can look forward to a long day of beating directly into the wind.  We will sail as much as we can, but I expect that we will have to motor sail a large part of the distance in order to make Bonaire by sundown.  We do not like to pick up moorings in the dark.

We are a bit nervous, because we've heard a rumor that the mooring field at Bonaire is quite full.  Since anchoring is prohibited, it would be a real bummer if we got there and found no room.  We could try going into the marina, but that is also likely to be full if the moorings are -- and trying to go into the dock in the dark is even trickier than mooring.

So, we'll have our fingers crossed as we head out tomorrow morning.
Posted by David at 2:19 PM No comments: