Finally back on Callisto

We have finally found our way back to the boat, after a grueling time sorting through 35 years worth of "stuff" that was in storage in NJ.  It was more than 100 F for many of the days we were working, and the only fun part was when it was over.  Much better to be back on the water (though still very HOT).

In Deltaville, we had the unexpected treat of sharing the marina with the Optimist Dinghy National Regatta.  Around 300 kids participated, from novices to budding America's Cup sailors, and ranging in age from pre-teens to early teens.  Here are a couple of photos: 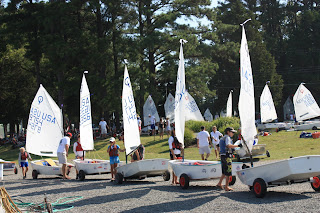 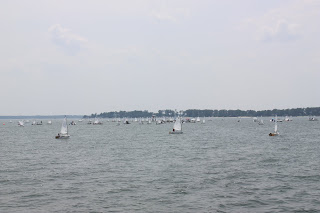 We left Deltaville on Callisto on Friday, July 23, and then the adventures began.  Our first job was to get out of the marina.  We were in a very tight slip, with very little room to turn, and a stiff cross-wind.  We got out OK, but managed to knock a brand-new piece of safety gear off the stern rail and into the creek -- gone forever.

The next step was to get out of Jackson Creek and into Chesapeake Bay.  There is a winding channel, indicated by green and red daymarks.  We made this transit many times last year without difficulty, but this time we got a few feet off the correct course, and felt the boat slide to a stop in the mud (more encounters with the bottom coming below).  Luckily, we were able to put the boat into reverse and slide ourselves back into the channel.

We sailed when we could, and motored when the wind was too light, towards Mill Creek off the Great Wicomoco river.  This was also our first stop last year, and it's a great place located a convenient distance from Deltaville.  There is also quite a lengthy approach through the channel into the creek, and while we were very seriously concentrating on this, we were distracted by a pod of dolphins.  Sorry, no photos, but there was quite a number of them, leaping out of the water parallel to Callisto and playing in our bow wave.  Babies, too.  Several times they smacked their tails into the surface of the water, to make a big sound.  Too bad we had to pay attention to our route!  Unfortunately, not quite enough attention.  We bumped the bottom again, swinging a bit too wide in the channel.  We were again able to use reverse to back off the shoal, but it took 2-3 tries before we were in clear water.

Next stop was the Coan River, a tributary of the Potomac.  We had a nice relaxing sail, a broad reach in winds from 5-10 knots.  Only one gybe (turning the back of the boat through the wind) the whole day.  At 5:30 we still had several miles to go, and motored the rest of the way.  Like most of these creeks and rivers, there is a winding channel on the way in.  This one is well marked -- maybe too well marked.

After winding around several marks and buoys, we came to a place with three markers in a line.  The first and third of these markers were green navigation marks.  In the US, green means you must stay to the right to stay in the channel.  The center marker simply said "Danger."  It seemed logical to us that we should steer clear of that mark!  Big mistake.

The correct route through the channel was to stay very close to all three marks.  We saw several large powerboats do just that as we waited, stuck fast in the mud that our keel found by swinging too wide of the marks.

One of the powerboats asked if we needed help, told us that there was a volunteer rescue service in the area, and asked if we wanted them to call the service.  "Yes!" we thankfully replied.  In about a half hour, a boat with three men showed up. We tied line to act as a bridle to the back of the boat, they tied that line to their boat, and tried to pull us off.  No joy.  Another fast powerboat tried making a big wake, but still no good.  Finally, a third powerboat took a line from the top of our mast out to the side, and heeled (tipped) our boat to the side, thus putting the keel on an angle and with less effective draft.  With yet another big wake, we were finally off.  The 7 or 8 spectator boats that had showed up all cheered. (so did we).

The Smith Point Rescue Service is a great organization.  They and the two other powerboaters who helped got a big "Thank You" from us.  We also made a voluntary donation to the SPRS, and were happy to do so.

The adventures continue.  We left the Coan River on July 25, and sailed to Solomons Island in Maryland.  This is a big yachting center, with many marinas and an unbelievable number of boats of all types and sizes.  We had a lovely sail, winds 10-15 knots on a broad reach for much of the day (this being the Chesapeake, there were a couple of hours of obligatory motoring).  Just as we approached the harbor, a thunderstorm started through the area.  Not much lightning or rain, but strong gusty winds above 30 knots (Beaufort 7).  We had the sails down well before the storm hit, and were very happy with the Outbound's ability to stay on track even at slow speeds in such conditions.  We had arranged to pick up a mooring ball in the harbor.  Picking up the pendant from the mooring ball in strong gusty winds was not easy, to say the least.  It took us about 10 tries to get the boat stopped close enough to the mooring for Gretchen to safely pick up the pendant line and get it attached to the boat.  When I finally got the boat close enough for her to do this, she got a spa treatment from the mud on the pendant.

This was great practice for our upcoming time in the Caribbean, where mooring balls are common and the winds are often strong.
Posted by David at 5:31 PM 2 comments: