We had a very smooth flight from Grenada to London, and spent several hours with Gretchen's nephew, Griffin.  He has been interning at the House of Commons for the past several months, and he have us an insider's tour of Westminster Palace and the Parliament offices.  We particularly enjoyed the small Chapel of St. Mary Undercroft, which is located beneath Westminster Hall.  It is beautifully decorated, and we feel privileged that we were able to see it.

After a night in a hotel near Gatwick, we took the bus to Heathrow, and finally returned to our apartment in Meggen.
Posted by David at 2:21 AM No comments:

End of the Season

Well, we all know that time goes by very quickly.  Suddenly we find ourselves at the end of the  2012 sailing season.

We have been in Grenada for 10 days, anchored in Prickly Bay.  This time was mostly devoted to boat chores, all the big and small tasks that need to be completed before we can leave the boat.  Mostly putting away and cleaning.  Yesterday Callisto was lifted out of the water by a big crane, and transported to the spot where she will remain until next winter.  It is amazing the very large and very specialized machines that are used to transport vessels weighing many tons.

We have a few more days of chores, things that are best done when the boat is out of the water.  Again, mostly putting away and cleaning.  The we fly to London for a night, where we will visit our nephew who is at the Parliament.  He has offered to give an insider's tour of the Parliament building, which we are very excited about.  Then another flight to Zürich and a train home.

We made a total of 42 passages this year, ranging from 1-11 hours.  This was a total of 1,109 nautical miles and we averaged 5.6 knots.  We did quite a bit more sailing this year than last, and found that we really enjoyed the time on the water.  We also did more hiking this year, and really enjoyed the walks, but also enjoyed meeting and interacting with the guides.  Among the highlights of the season, though, were meeting up with friends and family on Antigua and St. Martin, and interacting with cruising friends in the islands.

All in all, a great season!  But we have lots waiting for us in Switzerland.  Gretchen has already signed up for a golf tournament, and David will perform in a one-act play as part of a theater festival in Antwerp, Belgium, at the end of the month.  And, of course, lots of Swiss friends to see again.
Posted by David at 7:48 AM No comments:

Sorry about the long interval between posts.  We've been very busy, and have not always had good internet connectivity.

After hiking on Dominica, we really enjoyed a long and strenuous hike in the rainforest on St. Lucia.  One key difference:  on St. Lucia there is a lot of commercial (illegal) marijuana being grown.  Very important to have a guide, so that you don't accidentally stumble on a ganja plot, and make a Rasta very angry.  The trail was beautiful, and we took a side trip down a ravine to visit the en bas Saut waterfall.  This whole area was greatly affected by Hurricane Tomas in 2010.  The effects of numerous mudslides and severe flooding were still very much visible.


One of the highlights of our season was the Carriacou Maroon and String Band Festival.  This is the third year they have run it, and it is attended by an interesting mix of locals and tourists.


Maroons were runaway slaves who formed independent settlements together.  On Carriacou, the word is also used to refer to an event that commemorates the Maroon culture and heritage.  The Grenadian tourist board has combined this celebration with a music festival that focuses on string bands:  guitars, banjos, mandolins, etc.  We had not known that string band music was a big thing in the West Indies, but once we saw a lavender violin played with a baby-blue bow, we were convinced.

The first night of the festival was the Maroon event.  This took place in the village of Belmont, on the southeast part of Carriacou.  It was basically a big community meal.  Traditional foods were served in huge quantities to all comers -- and no one would take our money.  Lots of people having a good time and enjoying each others company.

The second day featured a series of String Bands playing along the main street in Hillsborough, the largest town on Carriacou.  Great music, but played at a typical Caribbean volume level (loud!)  In the evening, everyone moved to a park in Belair, north of Hillsborough.  There we saw many different groups from around the Caribbean demonstrating traditional dances and traditional music. 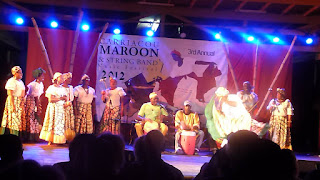 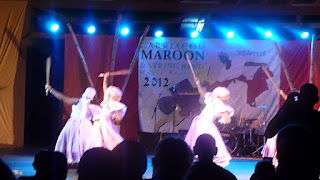 The evening continued with more String Bands, but it was after midnight and past our bedtime.

The final day saw more String Bands playing on the fabulous Paradise Beach.  Good beer and lots of souvenirs to invest in.

All in all, a great event to mark the closing of our 2012 season.

We are now in Prickly Bay, Grenada, preparing the boat to come out of the water in a few days.  Lots of chores, mostly cleaning, and we are very much hampered by an unusual period of rainy days.  A bit wistful about leaving the wonderful islands, but excited to be returning to friends and activities in Switzerland.