The last time we were in Antigua was in March of 2013.  Not too much has changed, the superyachts in Falmouth Harbor and English Harbor are interesting to look at, and cause some excitement when they actually leave the dock and go sailing.  There are some sailing races originating in Antigua that draw all kinds of racers from the sleek and new to the old wooden classics. 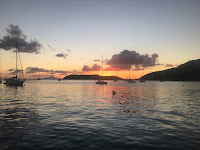 This year we also took a mooring in Falmouth Harbor and met two other Outbound boats.  There was a also a third in English harbor, but owners were not on board the time we were on island.  It is still amazing to meet other sailors with the same kind of boat as ours, since there are only 60 in the world.  We share tips and troubles and admire each other's choices in decor and layout.


There is a lookout point called Shirley Heights above English Harbor.  I have always wanted to get there, but we had always assumed you had to drive up or walk on the road.  Well, this year we discovered the hike.  When we asked a local fisherman on the path if we had taken the correct turn, he said we had, and then asked if we knew that it got steep.  We did.  The trail was well-marked, a bit steep, but not strenuous at all.  David, however, did experience a bit of agoraphobia, since we were on a ridge with nothing but sky above and cliffs below.  The view at the top was spectacular, we could even see our boat in the distance.  The walk down the other side was not as well marked, and we were momentarily led astray by following a few sheep on their trail.  We soon figured it out when the branches got too low for people... 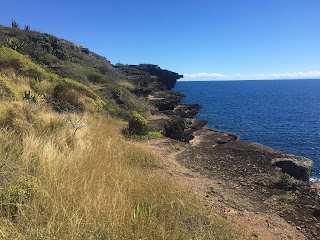 The next day we left Falmouth Harbor for Nonsuch Bay.  There is nothing between you and Senegal except the reef.  We snorkeled around Turtle Island, saw no turtles but plenty of small fish.  It is obvious that there are storms where waves make it over the reef, the coral had a lot of sand on it and some damage.  Then it was back to Falmouth Bay for clearing out of customs and immigration and on to Nevis...We had a great sail to Nevis, one of the few times we have come to Nevis with light winds aft of the beam...which means it was leisurely and flat.

More on Nevis later...
Posted by Gretchen at 2:14 PM No comments:

Earlier this year, David said that we might be bored this season since we have “done” the Eastern Caribbean for a total of five times.  WRONG!  We have been finding the sailing challenging, the anchorages wild and “rolly” at times and working at keeping up a semblance of a fitness routine with lots of rainy days.

It’s a good thing we always build a lot of flexibility into our schedule and have really good weather sources, one of whom is a retired Canadian weather forecaster who volunteers his time early every morning.  Thanks Dennis! You have given us great advice on the best time to move to the next destination.
We have now reached the northern end of Guadeloupe in the harbor of Deshaies.  Last night we watched a fishermen free dive 40 feet plus to retrieve a fish trap.  Fish traps of this design have been in use for literally millennia.  He knew we were watching, came over to Callisto and gave us three fish, two snappers and a grunt.  He wouldn’t take any money.   I poached them in garlic with salt and pepper, no wine on the boat, so it was definitely simple, but delicious.

Today we walked to Grand Anse, the next bay north.  This walk has two purposes, the beach and Samy’s Resto/bar. 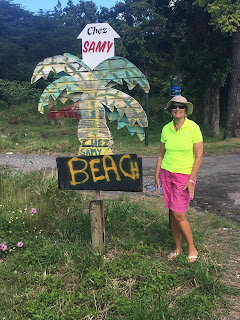 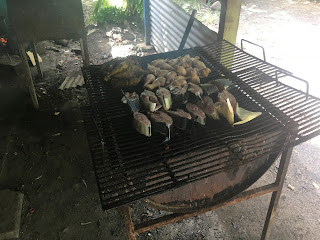 Samy has two wood fires going, one for the grilling of main courses, the other for the huge pot of rice.  Today Mahi Mahi and chicken were on offer with grilled plaintain and shredded pumpkin salad.  Samy also used his machete to open up some young coconuts and gave everyone a glass of coconut water.  The ti punch is of course, made with white rum with sugar syrup and fruit juice.  He pours the rum and adds lime slices, the customer does the rest to taste.

After lunch we walked the Grand Anse Beach, about a mile long.  The surf is always pounding and the sand is great for taking the callouses off those feet...

Tomorrow we have over 40 miles to go to Antigua, mostly upwind.  Another challenge, especially for David, who will have to wake up to an alarm at 6:30.  We hope to be underway by 7 and arrive mid-afternoon in Falmouth Harbor.  Another set of northerly swells is due to come in, which makes some anchorages uncomfortable and sometimes dangerous.  We anticipate a lot of boats seeking smooth waters in Falmouth, so we may run into people we know.  We plan to be in Antigua about a week, then it’s northward to St. Martin for the first of February, with a stop at St. Barths, Nevis or Monserrat on the way.
Posted by Gretchen at 3:35 PM No comments:

We are on the island of Dominica, which is one our favorite places to hike.  This is a truly beautiful and largely untouched place.  It is extremely mountainous, with hardly any flat land to support agriculture.  It is said that Dominica has 365 rivers, and I believe it.  Many of these rivers have exquisite waterfalls.

Some really beautiful waterfalls are spoiled by hordes of cruise ship passengers.  Others, though, are hard enough to get to that casual visitors never see them.  A few years ago we visited Victoria Falls.  To get there, you have to wade through 5 river crossings, and scramble up big boulders.  This year we opted to hike to Sari Sari falls.  We were joined by fellow cruisers Craig and Bobbi, who we had just met the prior day, and by our guide Jones Younis.

The guidebook describes this hike as moderate, but that was before tropical storms washed out the main path.  Now you have to take an alternate, and very challenging route up the riverbed.  I think I counted six river crossings, but I may have missed one.  This photo gives you a sense of the boulders we had to scramble over: 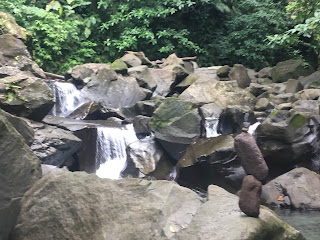 We climbed up the riverbed for about an hour and a quarter, often out of breath and always very careful of our footing.  We encountered an older woman who had fallen off a narrow section of the trail.  We gathered she had broken her wrist, and Jones told us that she was taken out on a stretcher.  Reason to be careful!

Our self-confidence grew as we went along, and the many places where you had to stretch awkwardly for the next foothold seemed a little less daunting.

In the end, it was worth it.  This is among the best waterfalls we have visited in the Caribbean.  Here's a photo and a video showing what we saw: 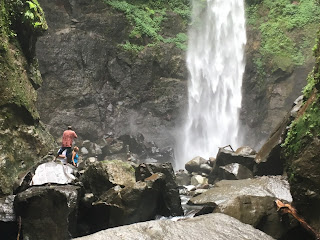 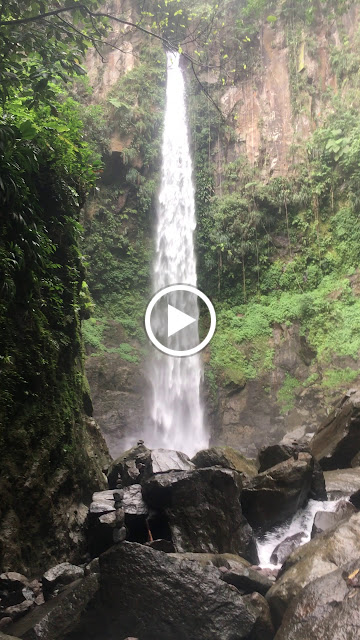 It only took us an hour to walk back.  Downhill is not easier, but we were more familiar with the terrain.

After the hike, we went to have lunch with an acquaintance, Moses James.  Moses is an old Rastafarian (almost as old as me), and we met him for the first time when we visited Victoria Falls.  He has an establishment called Zion Valley at the trailhead.  When we were first there, there was just his "Rastaraunt" and beautiful fruit and vegetable garden.  Since then he has expanded, and offers some very rustic rooms to rent.  His sons are doing the cooking now, but he appears to have trained them well.

Rastas are vegetarians, but they still can make a hearty stew.  Ours had lentils, breadfruit, yams, plantains, potatoes, Callaloo, and Moses' secret mixture of spices.  Absolutely delicious, and when seconds were offered I gratefully accepted.  As often happens with Rastas, we heard some perspective on philosophy, and some fascinating history of how Moses grew up in the country, tried city life, and returned to the land.  His holding has a world-class view of the confluence of two rivers, and is completely beautiful. If you want to stay there, here's the Airbnb listing:
Zion Valley

The taxi ride to and from the trailhead showed us just how much Dominica's infrastructure has suffered from recent tropical storms.  Our route was about twice as long, because the direct route was washed out.  There was a great deal of rebuilding work along the alternate route, and a couple of pretty sketchy temporary bridges.  We hope they can get things put back in order soon.