One of the most beautiful places we visit while cruising is the town of Soufriere on St. Lucia.  The town itself is very vibrant and busy, with lots of older, traditionally-built buildings.  The area around town is just gorgeous, with the two Piton mountains dominating the view.

For some years we have used the services of a young man named Jarvin when we come to Soufriere.  Jarvin helps us with moorings, arranges taxi tours and hikes, and is very dependable and personable.

This year, he offered us a treat:  tasting local foods as prepared by his mother, and meeting some of his extended family.  We were happy to agree!

The day started at 7:30am, when Jarvin brought us some of his mother’s soup for breakfast.  Based on fish and chicken, but with lots of vegetables and starches, it was delicious.  He brought us too much, so we put some in the freezer.

Later that morning, he took us to his mother’s house.  There is quite a group of small houses partway up the mountain, and a bunch of them are occupied by his extended family.  Siblings, cousins, aunts and uncles.  It’s a large family.

Jarvin’s mother, who’s name is Lucilia, served us a wonderful lunch.  The main course was fish with a delicious creole sauce, accompanied by beans and other veggies, local starches (breadfruit and root crops like dasheen), and salad.  Each part was seasoned to perfection with local spices.  Truly delicious!  Our only complaint was there was way too much – though we did manage to eat nearly all of it.  The house was small, but very well kept with recent paint, lots of knick-knacks on display, artwork on the walls. 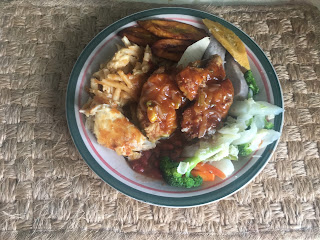 While we ate, we got to chat with some of Jarvin’s family, sisters (we think) and cousins.  Very fun.  After thanking Lucilia profusely, we paid a brief visit to Jarvin’s small house nearby.  He was working on carving a calabash for Gretchen.  Jarvin took a break from that effort to take us to his Grandmother.

We never did learn her name, everyone just called her “Grannie.”  She is 92 years old, has lived on St. Lucia all of her life.  She told us that she wasn’t used to speaking English, since her family used the local Patois at home, but she spoke very well.  We asked her how many grandchildren she had.  She laughed, “Too many to count!”  While we were there, one of her granddaughters stopped by for a visit. It is clear that the whole family pitches in to make sure she has what she needs.  As we took our leave, Grannie asked us to be sure and visit again.  We will!

We walked down to the harbor with another of our Soufriere friends, Niall (also known as Ras Afrika).  It’s been a really rainy period in the southern Caribbean, and we had to duck into shelter twice on the way down to wait out a squall.  In the second shelter (under the roof overhang of a local bar) we encountered four little girls, sisters.  They were just coming out of a public shower building, all clean and dusted with talcum powder, and carrying small buckets containing toothbrushes and combs.  The oldest was maybe 10 or 11, and the youngest perhaps 5 or 6.

As we waited for the rain to stop, the girls had lots of questions for us.  Where were we from?  How did we get to St. Lucia? (Callisto was just a short distance away, so we could show them) Where would we go next, and when?  They were very interested in our answers, and clearly trying to imagine what our cruising life was like.

We returned to Callisto and spent the rest of the afternoon trying to digest our very large lunch.  All in all, a very interesting and rewarding day. 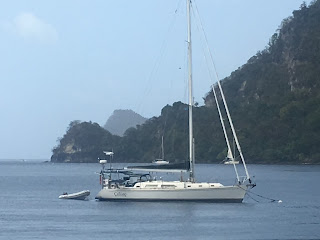